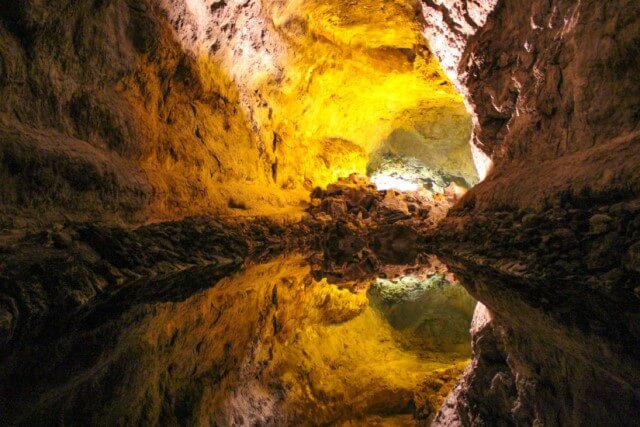 If visiting the island is on your mind, then Lanzarote Caves – Cueva de los Verdes is one of the places you should not miss.
Located to the northeast of the island and in the municipality of Haría, it’s found inside La Corona’s malpaís. A malpaís or badlands, is the area of land covered by solidified lava which rendered the surface tortuous, sterile and arid.
The Canary Islands are peppered with malpaís, bestowing its natural landscape with a foreign, raw beauty; the legacy of the volcanic eruptions that forged the archipelago in fire, hundreds and thousands of years ago. Visiting the Greens Cave in Lanzarote is venturing into the Earth, exploring deep pits of its interior, feeling overwhelmed by its profound silence while admiring the infinite shades of the walls. Lanzarote Caves. There is no other place in Lanzarote that can spark up your interest for the natural and cultural heritage of the island than Cuevas Los Verdes or the Green caves Lanzarote.

We at Lanzarote Experience Tours have compiled some of the reasons why this magical place it’s well worth the visit. Learn about Lanzarote Caves and Volcanoes

Explore the island’s secrets hidden below the rocks. One of the many reasons to visit the Greens Cave in Lanzarote  would be the complete geology and volcanology lesson given to its guests.

The cave is one of the longest volcanic tubes in the world. 7.6 kilometres crossed by numerous passages, some of which are yet to be discovered by scientists. The section open to guests is approximately one kilometre in length and can be visited in less than an hour.

The Los Verdes Cave was created more than 5000 years ago by the eruption of La Corona volcano which dramatically changed the shape of the island forever. The crater, which is the access point to the cave, gave way to lava-created tunnels that after cooling and solidifying shaped the whimsical rock formations of the galleries.

Along the perfectly conditioned path you’ll be able to observe the peculiar volcanic rock formations and tunnels created by the heat of the lava.

At the segment of the tunnel known as the Infierno (Hell) visitors will gaze upon impressive stalactites of solidified magma that provide visitors with a startling, provoking scene.

Attend a concert inside the Cave

The echo and the natural acoustics of caves provide the perfect setting to install several auditoriums inside them. If you are visiting the Los Verdes Cave in Lanzarote it might be a good thing to learn about the concert schedule for its auditorium, located inside the cave.

Attending a concert in such a magical place is a one-of-a-kind occasion, and we advise you not to miss it, should you have the chance.

If venturing into the depths of the Earth was not exciting enough, visiting the Los Verdes Cave offers quite the priceless sight: the infinite array of colors painting the volcanic formations of its interior.

A rich range of ochres, reds, greens, blacks and blues all the product of the diverse chemical composition of the walls (iron oxide as the main element). Accentuated by the cave lighting, the chromatic spectacle is a feast for the eyes. Pictures taken here are sure to be amazing!

Get to know its legends

It’s easy to see why just going deep into the cave is enough to let the imagination run wild and free, evoking old stories and events that might have taken place inside the long tunnels of Los Verdes Cave.

It’s well known that the aboriginal inhabitants of Lanzarote, commonly known as majos, used to take shelter in the Los Verdes Cave.

Sheltering, protecting those in need is a role the Los Verdes Cave kept playing through the 16th and 17th centuries, when pirates and slave traders from the north of Africa raided the population of Lanzarote. The people of the island run to the cave, hiding from the invaders until it was safe to leave and go back to the villages.

Many centuries after being discovered by man, the lands home to the cave became the property of the Verde family. This is suspected to be the origin of the Los Verdes Cave name.

But another theory points towards the shades of verde (green) of the cave walls as the source of its name. Either way, visiting Los Verdes cave in Lanzarote is effectively time travelling, from a time before the human race, to a time where men, women and children were forced to seek shelter inside the cave.

Let the final surprise amaze you

A little-known fact, the Los Verdes Cave rewards those that walk the whole of the cave and reach the end of the path a special view. We cannot reveal the secret here, but we can guarantee that It’s one of the most stunning places of the Los Verdes Cave, visitors won’t believe what they see!

Most important caves of Lanzarote At Lanzarote Experience Tours we take pride in offering the Grand Tour Experience, a comprehensive 9 hour tour of the south, center and north routes of Lanzarote. This tour includes guided visits to Timanfaya, El Golfo, Los Hervideros, La Geria, Jameos del Agua and the Cactus Garden. Also provided is the Los Verdes Cave Tour, a guided visit without queues and in small groups, to this spectacular cave.